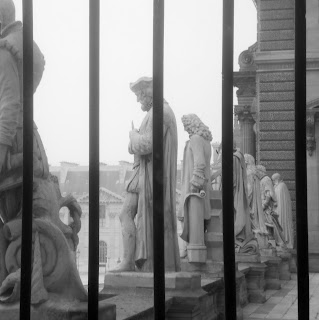 Driving up to the structure I’m taken by the landscape.  Everything is in balance.  The building is shaped in concentric squares and rectangles.  I notice the mix of white and silver, at times the two seem to immerse and appear opaque.  The green lawn surrounding the building offers a nice contrast to the subtle shades of haze.  The sleek, grey concrete walkway unfolds in a whimsical curvy design as you make your way to the entrance.  The grounds at one time were a coalmine; the walkways mimic the tunnels beneath the surface.

After passing through security you’re engulfed in a large space containing several glass circular pods housing different social areas of the museum.  The one called “Picnic” has several tables and is used by guests that have choosen to bring their own sack lunches.  The space offers a nice mix of families, couples, and students.  The museum also has a casual café (a restaurant is being built).  Another pod houses the museum gift-shop with an assortment of books in French and English, jewelry, toys, postcards and stationery.  Each pod is like a fish bowl, open at all angles for those standing outside to peek in.

In the Grand Gallery, I’m consumed by the immensity of space.  There are no walls separating the exhibits. As you make your way toward the furthest wall, you walk through the progression of the Humanities, from 3500 BC with the Sumerians Tablet to the magnificent 1830 French painting by Eugene Delacroix, Liberty Leading the People.  If you’re struck by a particular piece of art that leaves your mind yearning for more insight, rest assured, the museum has a resource pod with additional information on their collection.

Unlike other museums, the lowest public level provides a peek behind-the-scenes.  At the bottom of the white curved staircase, stands a long wall of glass holding relics of times past, ornate golden frames waiting to house paintings, and pieces of ancient statues, many missing limbs. I saw dusty tiles and wondered where and when their journey began, it looked like a scene from Indiana Jones or Night at the Museum.

Curiosity can be rewarding, especially if that curiosity leads to other curious questions.  Through places like the Louvre-Lens the mind is given opportunities to flourish.  And until the end of 2013, your chance to flourish is free.