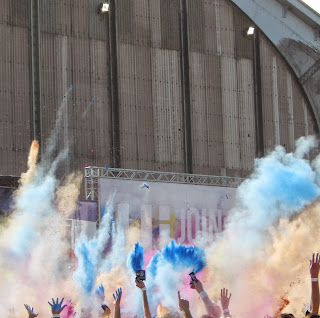 I am not a runner, so how did I find myself boarding a Saturday morning train to Brussels for a 5k run?  It’s simple.  This was no ordinary 5k and the people I would be “running” with weren’t ordinary either.  As a matter of fact, everything about the day was nothing short of extraordinary!


I equate myself to Ferdinand, from Ferdinand the Bull.  This classic children’s book revolves around a big red bull that dislikes motion, he prefers to sit in the shade of trees while smelling flowers.  I like Ferdinand; walking and hiking suit my style.  Both allow me to get my heart rate pumping, while also allowing me the comforts of taking in my surroundings.


After learning several families from our community were signing up for an organized run that involved getting drenched, not in sweat, but with color, my interest was perked!   I discovered this run was different, as a matter of fact, running was optional.  There would be no timing.  And tutus and fedoras were optional. Nearly everyone participating would begin in a white t-shirt.  Along the 5k path there were five archways, each marking one kilometer.   As participants would near each archway, their ears would be greeted by upbeat musical tunes.  As they passed through, lines of Color Run folks would throw and spray colored powder onto anyone and everyone that entered their pathway.  By the end it would look as though bags of Skittles had exploded onto each and every participant!  As if this fun quirky event weren’t enough, I also learned the motivation behind so many families attending.


Jan Workman.  Her name precedes her. I would like to say I know Jan personally, but I’ve only admired her from a distance.  She’s an active force within our community.  She’s involved in a Lifesaver assortment of activities.   I’ve often thought of turning her into a verb, “Don’t push me or I’ll go Workman on you!”


Mrs. Workman’s stamina and persistence have trained her for another kind of race, the race against breast cancer.  She now finds herself keeping busy with chemotherapy and doctor appointments.  I don’t like the combination of words: breast and cancer.  Having been exposed to their ruthless behavior in the past (two of my aunts are breast cancer survivors) I want this medical term to feel small and defeated, I want it crushed!


What better way to crush the pavement than to have Jan Workman and loyal friends and family join in the Color Run in Brussels!   This event embodies the woman we had all gone to support.  There was a youthful spirit, positive energy, and enough colors to turn a rainbow green with envy.  Not unlike Mrs. Workman, the event was full of personality and attracted the masses (some 10,000 attended).  More importantly it reminded me why sometimes we have to coax our inner Ferdinand to stand up and move.   This woman of wonders is taking the bull by the horns and marching forward, and in the process, adding color to the world surrounding her.
Posted by Judy Rae Merhar at 8:22 AM