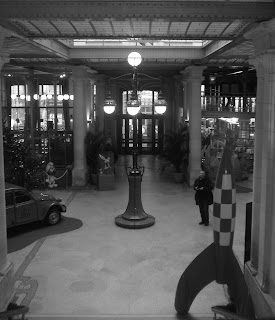 The Belgians are complex and diverse.   Many are aware of the country’s varied assortment of accomplishments: like producing some of the world’s best chocolate, lace and beer.  But did you know that Belgium is home to the world’s largest population of cartoon artists, over 700 reside in this tiny country.  They even have a museum in Brussels dedicated to what has become known as the world’s “Ninth Art”, Comics.

Walking into the Belgian Comic Strip Center, you’re greeted by a glistening red and white checkered rocket and a candy apple red convertible.  The building itself is the perfect home to the museum.  It was designed by Brussels very own Victor Horta, a leader in Art Nouveau design.  The whimsical glass and iron scrolls compliment the playful characters waiting upstairs to greet the curious visitor.

No English translations here, no matter. One of the beauties of comics is that they’re visual.  Our family was entertained by the colorful displays of stories.  There were also hands on activities incorporated into several displays.  I especially loved seeing my childhood favorite, The Smurfs (Les Schtroumpfs)!  It was fun discovering the actual height of a Smurf, only three apples high.  There was even a true-to-size mushroom village, tiny of course and behind glass.  As my feet moved forward, my childhood seemed one step closer in memory.

My husband liked the exhibits on some of his pint sized heroes like: Tintin, Spirou, and his personal favorite, Lucky Luke, the gun toting cowboy that could “Draw faster than his shadow”.   There are original posters and cartoons from Lucky Luke’s past.  Like the poster of him smoking his trademark cigarette.  When his popularity began to spread, health officials started to rally to have the cigarette removed.  In the mid 1980’s it was replaced with a piece of straw.  All of the exhibits walked you through the cartoon’s history, including the politically incorrect (and there are many!).

The gift I valued most on this journey was remembrance.   As I looked at the cuddly blue Smurfs, I couldn’t help but remember a time in life when my sister and I could indulge in Saturday morning cartoons.  There was nothing to schedule around.  It was the only day of the week that offered back-to-back episodes of cartoons, the only day we could watch the Smurfs. Every kid on the block knew, if you snooze you lose. Our window of animated childhood enlightenment only aired from 7-10am, after that was news and all the boring stuff our parents liked to watch.  Cable didn’t exist; DVD/VHS players were non-existent.  Visiting the museum served as a reminder of simpler times, a time before Skype, wireless, and instant TV.

Meandering through life’s paper heroes turned out to be reassuring. It was a relief to see 21st Century kids and adults get lost in the world’s “Ninth Art”, comics.  Everyone needs a hero, even if it’s only on paper.  It turns out my super hero was sitting next to me on Saturday mornings…but it would take a Smurf to remind me.
Posted by Judy Rae Merhar at 11:04 PM