Under the Mallorcan Sun 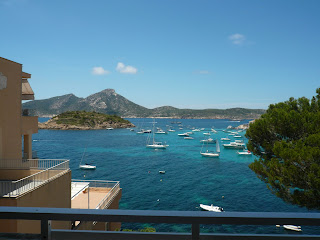 Reaching the shores of Mallorca, off the southern coast of Spain made me a believer that not all post cards are photo shopped versions of a prettier reality.  As our plane descended over the translucent turquoise waters, it was obvious scenes still exist that are better than paper images carrying a postage stamp.

I’m not certain when it happened, but over time I’ve come to dislike beaches.  It wasn’t always like this.  Growing up I remember my sister and me waiting anxiously for Mom to drive up from an eight hour nursing shift.  My ears could hear the gravel when the car slowly entered our driveway.  If we were lucky she would say “yes” to our desperate pleading to head to sand and water.

Over time, I’ve come to see the beach as nothing but a hassle.  Sand seems to take over everything, the car, clothes, the floors, not to mention every crevice of your body.  In addition, since having kids, I’ve found the beach tests my “control” limits.  I’m constantly on edge that I might lose sight of one of our girls, and then what?  The thought always stops before I reach a logical conclusion.  Being in Mallorca allowed me the opportunity to face some of my fears (including buying a swimsuit!).  It also gave me a glimpse into a forgotten time, youth.  Not my own, but my four daughters.

The girls were excited beyond belief when we booked our flights and vacation rental. Since arriving in Belgium two years ago they’ve begged to go somewhere sunny and warm.  Once we were booked, they immediately began to make a checklist of what we would need: swimsuits, sunscreen, sunglasses, and flip flops, etc...  I hadn’t thought of these things since I grew out of rompers and bubble gum flavored ice cream.   With their help, I clicked and purchased a new swimsuit for each of the girls, and me.

It wasn’t until we reached our holiday rental home that I learned the difference between a terrace, balcony, and patio.  Our vacation home had all three.  From all levels you could smell the salt from the ocean, see the island of Dragonera (called so, because it’s shaped like a sleeping dragon), and hear faint laughter from the nearby beach.  As soon as the girls ran to claim which room was theirs, they came running and shouting, “When can we go to the beach”?  My internal rolodex flipped immediately to childhood.  With a quick change of clothes, we were off in search of what I had long dreaded, sand.

This vacation offered many things. I could go on about the lovely trip into Palma where I met a man that owns the only rare English bookshop on the island.  I could go on about Deia, the home and resting place of the late poet, Robert Graves.  And I could go on about the most amazing hike I’ve yet to experience on the island of Drangonera.  But all these things would fail in comparison to what I learned at the beach.
It took my four girls, the smell of coconut oil, and scents of the salty sea to be reminded that life really is good at the beach.  Letting go became easier when it was followed by sounds of laughter.  For the first time I realized why after working an eight hour shift my single mother would pack up my sister and me and head to the shores of SW Louisiana.  Something about the beach allows the body and mind to ease and relax. And it turns out the sand I have loathed since adulthood happens to be Mother Nature’s best exfoliator!  As for my fear of letting the girls out of my sight, they not only did escape my vision, but lived to tell about it.  And most likely we all had a better time because of.  Cheers to the beach~
Posted by Judy Rae Merhar at 9:32 PM