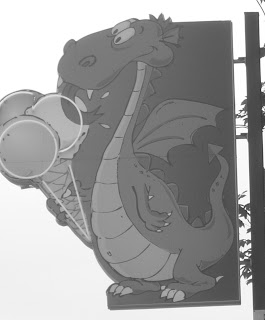 I’ve often found physical similarities between couples that have been married for many years.  On a few rare occasions I’ve also found myself seeing similarities between furry canines and their human owners.  It wasn’t until recently that I noticed a building too, could take on an owners physical features.
Our family has fallen in love with a dragon.  It sits happily indulging in several scoops of pastel colored ice cream.   It only took a week after arriving in Belgium to walk through the doors of what would become a family favorite.  The whimsical dragon brought us in, but the assortment of scrumptious confections has kept us going back.

Georges Doutrelepont’s shop sits contently off a busy street. Walking up to the front door, you’ll notice the immaculate lawn and sparkling windows. For a brief moment on our first visit, I hesitated bringing the kids inside (it looked too nice).  I was glad I ignored my original impulse.  Eyes and noses are rewarded with temptation at every corner.  To the right you’ll find more than a dozen soft peaked domes of gelato flavors to tempt your palette.  Straight ahead the sweet perfume of dozens of handmade artisan chocolates quietly prompting, “Eat me, please”.   If your eyes make it past the chocolates, you’ll be rewarded with the colorful assortment of ice cream cakes, sitting proudly on a tiered pedestal.  After spending a morning in the kitchen with Mr. Doutrelepont, I began to discover the mystery behind what makes Georges Doutrelepont’s shop unique.

Ten years ago, Mr. Doutrelepont had a dream.  He dreamed of having his own Chocolatier/Glacier shop. He worked out of his basement in Brussels for three years developing and testing recipes.  He then traveled to the northern hills of Tuscany to study at the Carpigiani Gelato University in Bologna. On his return he would select a location along with a signature trademark to coax the unknowing into his store. The playful dragon prompting those that pass by to stop in has a unique story.  Mr. Doutrelepont’s great-great Grandfather operated a successful brewery in the Ardennes, at one time employing over 120.  Proudly, he tells me the dragon was his hometown’s symbol.  The brewery his great-great Grandfather owned used the dragon on their beer labels.  It was only natural for Mr. Doutrelepont to do the same.   The fact the local area’s emblem is a Dragon, only added to the appeal.

If you fancy eating around the world without needing your passport, you’ll appreciate the lengths Mr. Doutrelepont has gone through to ensure your taste buds are not disappointed.  He only uses the best ingredients: almonds from Portugal, hazelnuts from the Piedmont region in Italy, pistachios from Sicily, and vanilla from Madagascar.

As I watch him cut a sheet of almond paste into perfect little squares, it dawns on me his attention to detail carries through in everything he touches. The hundreds of perfectly lined chocolate molds against the wall, the neatly arranged circular cake rings lining the gelato room, his crisp white chef’s coat and neatly parted hair, these are all signs of his quest for perfection as well.   When I ask if he feels customers have an appreciation for the time involved in the production of one praline, without hesitation he confidently says, it doesn’t matter.  His personal drive for quality is what pushes him to provide the best product available.   Mr. Doutrelepont went on to explain how important it was in finding the perfect architect to build the structure that would house his dream.  He insisted on quality that would last through future generations.  I couldn’t help but feel Mr. Doutrelepont is rooted within the mortar of his dream.  Not unlike the building's façade and interior, Mr. Doutrelepont too, strives for quality and providing his customers a product that will stand the test of time.  The building and its owner are structurally sound.

Chefs have a phrase, “Mise en place”.  This phrase translates to “Everything in place”.  After spending a sunny Friday morning in Georges Doutrelepont’s Chocolatier/Glacier shop, it’s apparent he lives by this motto.  From the building’s tidy entrance to the impeccably clean kitchen, to the delectable treats inside, it’s clear all is in place within this sweet shop. Next time you see the unassuming building with the silly dragon licking ice cream scoops, you may want to stop the car.  And I must say, it’s pretty amazing walking into someone else’s dream.
Posted by Judy Rae Merhar at 5:56 AM