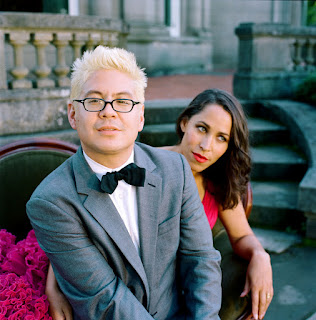 “To make art accessible to as many people as possible, free of elitism but without lowering standards - Victor Horta

Who needs a backstage pass when one and all are given the opportunity to be on stage with the musicians.  The night Pink Martini enchanted fans at the BOZAR in Brussels gave me a taste of something much more powerful than anything served at a bar.

The BOZAR, or Palais des Beaux-Arts, is a large unobtrusive art deco building created by Brussels most famous architect, Victor Horta.  If you’re a lover of the Humanities: Photography, Art, Architecture, Music, Literature, Theatre, and Dance, then you’re in for a treat.  This center successfully blends all elements under one roof, a natural fit for a band that embodies the above prerequisites.

This Portland, Oregon based ensemble serves up a heavy shot of cultural melodies.  In one magical night, tunes floated seamlessly through the air in French, German, Japanese, Spanish, English, and Turkish.  Not unlike their attire, the band was full of contradictions.  They’re sophisticated, yet playful.  A few are Ivy League graduates while others are scrappy, brilliantly self-taught musicians.  At times their sound is quiet and restrained, and then with a slight twist the audience is transported to the sounds of a Cuban beat that gives your feet a heartbeat. Those attending the concert were as varied as the band.  There were tailored silver haired gentlemen sipping wine along with youthful hipsters wearing t-shirts and jeans. The band’s creator and pianist, Thomas Lauderdale breezed by as the eclectic crowd sipped on pre-concert cocktails.  Resembling the boy superhero, Dash from The Incredibles, Mr. Lauderdale’s petite frame topped off with a streaked Mohawk, fluttered on air, so quick in his motion that no one noticed as he glided by.  Twenty minutes later he was on stage, along with eight other musicians and their dazzling lead vocalist, China Forbes.  The overhead chandelier in the Henry Le Boeuf Hall foreshadowed events.  An ornate gold and white, three tiered upside down wedding cake (or so it resembled), befitting of a group that would turn a subdued crowd into a party scene.  James Bond might affirm, these fans wanted to be shaken, not stirred.

The band was dressed in elegant threads.  All of the males appeared as though they had strolled off the set of Men in Black: black suits, white button down shirts, and skinny black ties.  As Ms. Forbes waltzed onto the stage in her floor length black gown, a slit up to her thigh, and high heels that shimmered liked diamonds, the scene was complete.

If pixie dust exists, I’d have to say the night Pink Martini graced the BOZAR, the stars aligned.  Throughout the night, in his genuinely clumsy broken French, Mr. Lauderdale liked to equate his energy to the ten cups of coffee he had enjoyed throughout the day.  His adrenaline was palatable.  And it came not from coffee consumption, but from the eager heartbeats seated before him.  The audience’s energy became a tangible element that Mr. Lauderdale consumed with one gleeful gulp.

You have to listen to this eclectic band in order to be transported. In one evening I escaped to six countries without ever leaving the comforts my red velvet seat.  During the two hour show, on three different occasions the audience was encouraged to go on stage and dance. Accessible to the crowd, just as their vast repertoire of lyrics and melodies would suggest, there were no barriers or boundaries.

By the end of the night I was intoxicated with the lingering sweet elixir of the band. Who needs a drink, when you have Pink Martini?  Victor Horta’s vision still thrives within the Humanity filled walls of the BOZAR.  Cheers to accessible art, in all forms~
Posted by Judy Rae Merhar at 5:06 AM